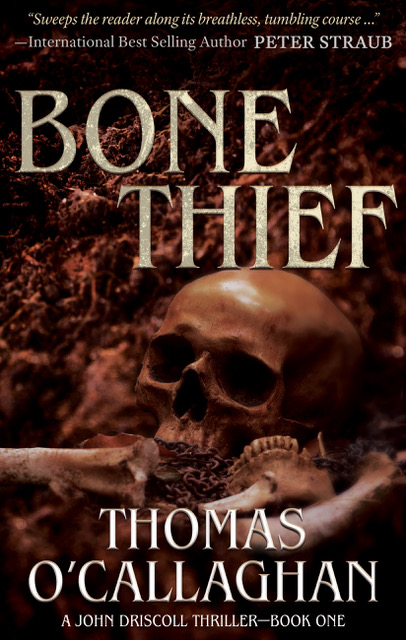 
“The fire-breathing Thomas O'Callaghan has scorched his way into the first rank of writers exploring the psychology and methods of serial killers alongside those of their often-troubled opposite numbers, police inspectors. Bone Thief sweeps the reader along in its breathless, tumbling course — just the thing for an autumn evening, a comfortable chair in front of the fireplace, a measure of single-malt scotch, and, from deep in the surrounding woods, the howls of faraway madmen.”
— Peter Straub, Bram Stoker Award winning author of A DARK MATTER

“Sharp as a scalpel, chilling as ice, Bone Thief, by Thomas O'Callaghan takes you on a relentless and harrowing ride into the disturbed world of a serial killer who steals his victims' bones. From dark beaches to immaculate hospitals, police back rooms to the mansions of the wealthy, O'Callaghan peels back the layers of the human soul with informed surety.”
— Gayle Lynds, New York Times bestselling author of The Last Spymaster and The Coil

“From its chilling opening to its slam-bang conclusion, Bone Thief delivers the goods. You won't soon forget this truly creepy serial killer -- or the haunted cop who struggles to bring him to justice.”
— P.J. Parrish, Edgar and Shamus nominated author of the Louis Kincaid series

"Authentic cop details, a compelling plot, and a twisted killer who'll make you look over your shoulder with every page."
— Lynn Hightower, Shamus Award winner, author of When Secrets Die and Fortunes of the Dead

"With expert pacing and plotting, Bone Thief will keep you riveted until the surprising, satisfying end. Be warned, however — this one should be read in the light of day."
— Alafair Burke, author of Close Case, Missing Justice and Judgment Calls

"Bone Thief is a strong, sharply written debut from O'Callaghan — there's a fast-paced plot, intrigue from Driscoll's personal life, and the main requirement of every good thriller: a smart cop facing off against an evil-but-clever serial killer."
— Bookbrothel.com

"Very few fictional scenarios provide the punch and chills I experienced while reading Bone Thief. Characters and details were realistic and horror penetrated to the marrow."
—Midwestbookreview.com

"Bone Thief is that rare commodity in murder-mystery fiction which can actually give the reader nightmares. Thomas O'Callaghan, the author, manages to surpass writers such as Stephen King, Clive Barker or Dean Koontz with horror of content while keeping you absorbed in the story."
— WhoDunnit.com